From Switzerland to Denmark – 3rd and current owner 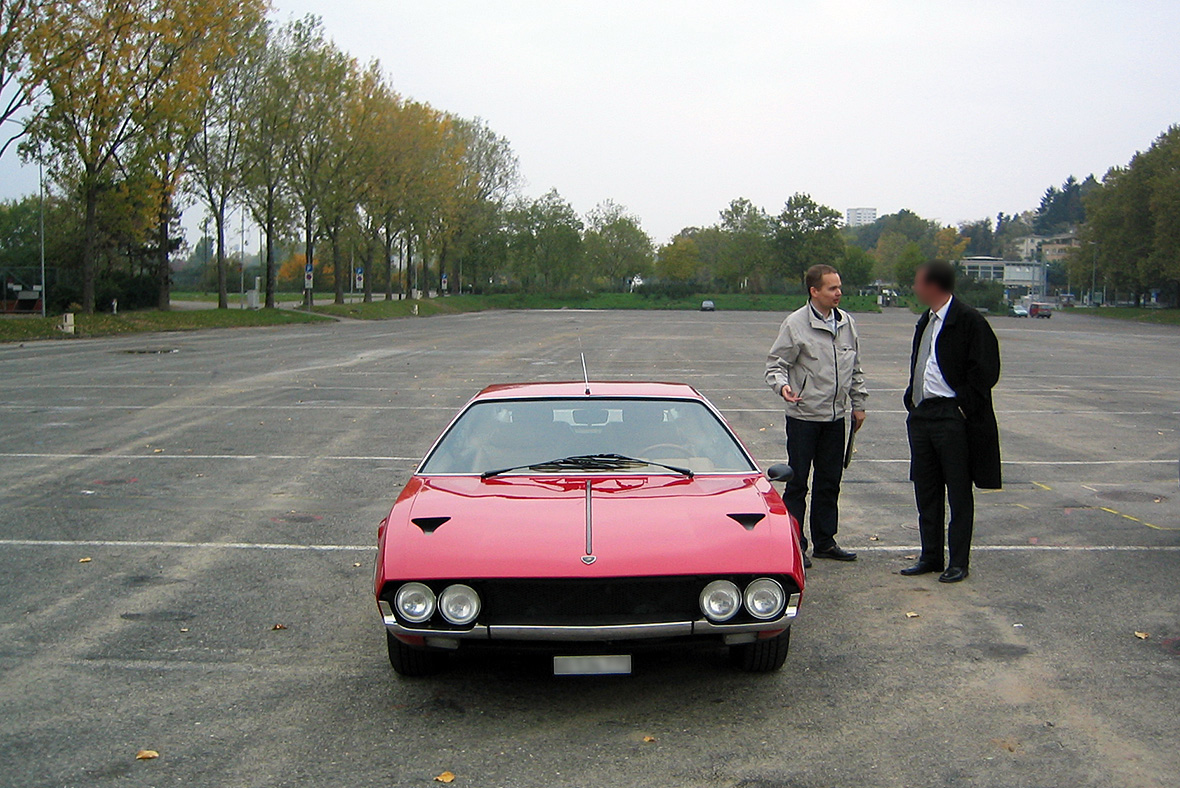 Espada number #7198 from 1969 changes ownership for the third time in Lausanne, Switzerland.

I had been searching for a series I Espada for about 2 years when I finally found # 7198 for sale in Switzerland near Lausanne. I decided to drive the 1300+ km with a good friend to have a look at the car and if everything worked out then I would drive the Espada all the +1300 km back to Denmark.

After an inspection and a test drive the deal was closed and I was handed the keys by Mr. Bournet and the trip back to Denmark could begin.

It would probably be a good idea to fill up the two interconnected tanks completely before going back to Denmark, although the fuel economy turned out not to be as bad as expected (about 7-8 km/l).

We headed for Denmark and my friend was driving my Ford and I followed him in the Espada with the biggest smile ever on my face. Driving my new acquired Espada on a +1300 km road trip to Denmark was a dream come true and the lack of speed limits on the German Autobahn didn’t make things worse. On a highway section with 3 lanes and almost no traffic it was too tempting not to push the pedal to the floor. I grab the steering wheel tight, floored the pedal and the speed increased from the 150 km/h cruising speed to 230 km/h (on the speedo) before I backed off due to a little too much play in the steering.

This car is capable of more than 230 km/h but I didn’t felt the need to go for the top speed at this time. The steering play and a faint odor of gasoline was the only two minor issues I noticed, and both will be solved soon.

The Espada was officially declared for a top speed of 245 km/h which does not seem unrealistic. It is quite impressive that this still holds today 34 years later, it indicates a healthy engine.

At the Autobahn the Espada is really in its element and its easy to understand and feel the intention from Ferruccio as a true GT luxury car. The engine pulls amazing at higher freeway speeds, the revs are low with 5 gears and the wind noise is remarkably low.

It’s hard to understand that this car is from 1969 and it must have been quite a high-tech car back in the days. Until December 1973, there were no speed restrictions on the Autostrada and the number of cars was significantly lower. So if you were going from Bologna to Rome in an Espada, this could be done in a couple of hours and there would be no faster alternatives. Today, the same trip will take about 4 hours with light traffic.

It was getting late and we were half through Germany so we headed to a motel where we could get a room with a direct view to the parking lot were the Espada was parked for the night .

Next morning the temperature was around the freezing point so we were worried if there was power on the battery and whether it could start in the cold weather. It fired up right away without any drama at all and after few minutes the engine found its smooth idle and we were ready to continue the trip. Fortunately, there was no salt on the road since the ground still was warm, so I didn’t need to worry about that. Here in north Europe most classic car owners never drives their car in the freezing period due to the heavy use of salt on the main roads and in the cities.

We decided to take the ferry from Puttgarden to Rødby which saved us about 200 km through Jutland. Before arriving at the harbor in Puttgarden we took the time for at little photo shoot:

After the photo shoot we boarded the ferry and the cramped space on a ferry is no less worrying in a classic Lamborghini.

We got well from the ferry without any scratches or dents and only had a couple of hours drive home.

Finally, parked in the parking basement below my company until I have completed the building of my own house with an integrated garage. What an adventure! I have been dreaming of owning Lamborghini ever since I was a kid and I looked down at the roof of a overtaking Countach from the backseat of a small Opel Kadett when I was about 8 Years old. Today that dream came true and I’m not disappointed!